You are here: Home » No need to wait for Newt Gingrich’s “tax-free” Detroit vision to take a chance on the city

You are here: Home » No need to wait for Newt Gingrich’s “tax-free” Detroit vision to take a chance on the city 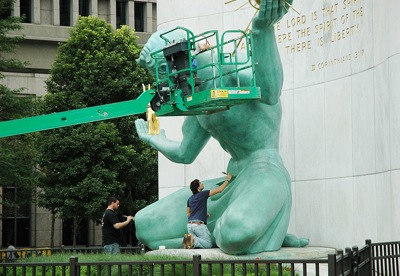 Workers cleaning up a statue by Marshall Fredericks titled 'The Spirit of Detroit.' Photo: Lisa Singh

Detroit has always been a trailblazer. Even when it comes to being the first to crash the economy.

So, it’s no surprise that the city — which now ranks as the first metropolis in U.S. history to see its population drop below 1 million — has become a cautionary tale. For some, of big business; for others, “bad” government. The latest to weigh in is Newt Gingrich. The other week, the former Speaker of the House offered this eye-opening suggestion for the city’s woes: Make it a total tax-free zone. For 10 years.

It’s something that Detroiters are already doing — something I saw, first-hand, during my own visit to the city. Sure, investors seem to have given up on the city. Within one square mile of downtown, you won’t find any national restaurant chains, except one lone Hard Rock Café. But the locals are still forging ahead.

About 125 locally owned bars and restaurants call the city home. What’s really eye-catching is how many of these establishments are run by Detroiters under the age of 40. People like Jeanette Pierce, who helped launch a tour guide company about four years ago. And, Tim Tharp, owner of Forans Grand Trunk Pub, which serves up some 15 varieties of Michigan beer.  Then there’s Torya Blanchard, a former French teacher who launched a creperie business two years ago, and now has two new locations on the way.

“What people don’t get is the resilience of Detroit and the surrounding metro area — we’re a very resilient people,” says Blanchard.

Tharp, the pub owner, tells me: “There’s a lot of us that have such a strong love for this city because it’s our heritage … it’s given so much.”

Check out the full story here.

You’ll see how Detroiters are putting the future on the table. One beer, and crepe, at a time.