You are here: Home » Westminster dog show: The hotel where it all started — 135 years ago

Westminster dog show: The hotel where it all started — 135 years ago

You are here: Home » Westminster dog show: The hotel where it all started — 135 years ago 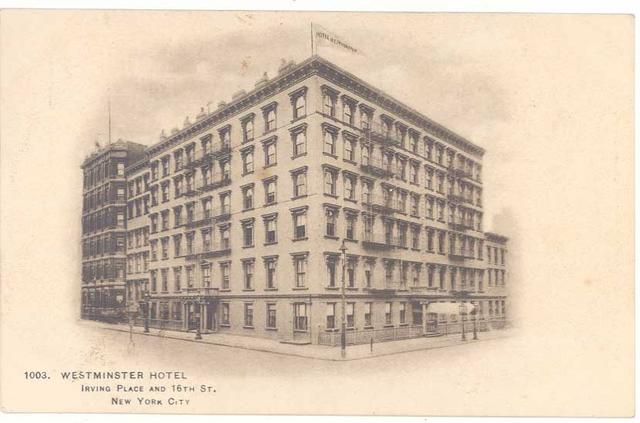 Westminster dog show and Madison Square Garden – it’s hard to think of one without the other. But back in the day, the dog show extravaganza actually got its start back at the Westminster Hotel, in New York City. In the late 1870s, a group of hunting sportsmen who routinely met there created a kennel club to showcase purebred dogs.

The name of the hotel, and its association with the dog show competition, has stuck long after its demolition in 1909. During the hotel’s heyday, Charles Dickens stayed there, as well as the American singer Clara Louise Kellogg, American realist author William Dean Howells, the American theatrical and literary agent Elisabeth Marbury, and English actress Adelaid Neilson. Many of those names are now forgotten. Except the Westminster, in name, anyway. Here’s a look back at the hotel, by travel publisher of the day Moses King:

At Irving Place and Sixteenth Street In One of the Quietest and Most Aristocratic Localities of New York. While this is the very centre of the Metropolis, being within a block of Union Square, where all the great retail stores, the fashionable promenades, the theatres and all the direct lines of transit by elevated and surface roads find a nucleus, the immediate surroundings of Irving Place are as peaceful as a suburban resort. The advantages of such a location are obvious. To escape the bustle, din and confusion that characterize the great thoroughfares of New York and yet be in the midst of the shopping and amusement centres, constitute an attraction which no visitor can afford to ignore.