You are here: Home » They’ve all come to look for America: Ellis Island 55 years later

You are here: Home » They’ve all come to look for America: Ellis Island 55 years later 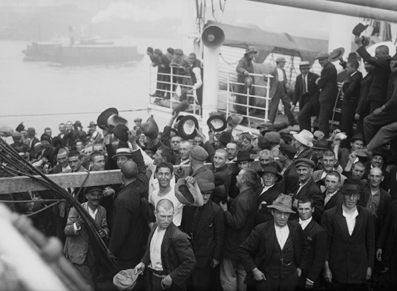 It’s been 55 years since Ellis Island last opened its doors to millions of immigrants. My mother was one of them.

She reflected on that journey recently — uncharacteristically, as it happens. I couldn’t help but do a double-take when she declared, a bit dryly: “I found myself.”

Turns out, she was on Ancestry.com, and, in a moment of curiosity, she looked up her name. The website offered this telling detail: She came through Ellis Island in the summer of 1949.

Ellis Island: A look back

Between 1892 and 1954, Ellis Island served as the main port of entry for millions of immigrants from across the Atlantic — one of the largest human migrations in history. During its first 30 years, the facility saw a flood of immigrants, nearly 25 million, from southern and eastern Europe. The National Origins Act of 1924 came to severely restrict those numbers, however. 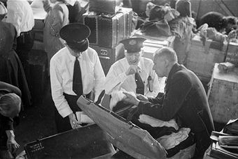 After World War Two, The Displaced Persons Act of 1948 made an exception, allowing tens of thousands of war refugees entry into America (see image, right). Among them were my mother — then, a girl of 10 — and her parents, with whom she’d spent several post-war years at Camp Traunstein, a DP camp in Germany that had previously served as an extension of Dachau concentration camp.

Like most immigrants, my mother spent just a few hours at Ellis Island. But the memories have endured — the feelings, mainly, that accompanied each step down a boardwalk toward solid ground, America.

Since 1966, Ellis Island has been listed on the National Register of Historic Places. Today, the main building serves as a museum — every year, about two million people pass through it to learn about the country’s immigration history.

Meanwhile, as many as 29 buildings on the island — a large swath of land covering roughly 30 acres — remain unrestored, something the Obama administration has sought to rectify by allotting $26 million for their partial restoration. (Another big fundraiser has been Republican strategist, Wyatt A. Stewart.)

But you don’t have to wait for restorations to be complete. Since 2005, the abandoned portions of the island have been open to tours on a limited basis. Between now and end of December tickets are on sale (details here.)

With more than 40 percent of Americans able to trace their ancestry through Ellis Island, chances are you’ll find a piece of your own family history within reach.