"All the world is welcome here." LBJ points the way to his ranch from Norway, Sept 1963 (Photo: Volkmar Wentzel)

STONEWALL, Texas — There’s something wistful about this place: a sprawling 600-acre property along the Pedernales River in central Texas. More than 35 years after Lyndon Johnson’s death, the LBJ Ranch — or “Texas White House,” as it came to be known because of the large amount of time Johnson spent here during his presidency — still bears his imprint. His glasses rest on a desk in the main house. His prized Lincoln Continentals, beneath a carport canopy. The ranch itself still operates, with nearly 100 Hereford cattle that descend from the same line of livestock Johnson once raised. Then there’s the 400-year-old oak tree beneath which he often made executive decisions. It stands, too, a testament to what critics and fans alike agree: LBJ’s contributions to American life endure; they even helped pave the way for the election of Barack Obama.

Toward the Great Society

That legacy was cemented 45 years ago, this week, when Lyndon Johnson articulated his vision for a “Great Society” in his second State of the Union address. In astonishing brevity, Johnson ushered in a sweeping string of social programs — from Medicare to Medicaid, Head Start to Jobs Corps — to bring the less affluent into the mainstream of society. That vision came at a cost — the heftiest price tag in the whole history of peacetime America. But love him or not, it’s hard to imagine a president in recent memory who’s had more of an impact on America’s social fabric. Beyond his attempts to level the playing field, he signed the first comprehensive civil rights legislation since 1875, which, in one fell swoop, eliminated “Whites Only” signs across the South. His presidency also ushered in a radical break with previous immigration policy; for the first time in the 20th century, skilled professionals from Africa, China, and South Asia, including my father, were allowed entry into America (thanks, Lyndon!)

Now, America stands at the next crossroads: The largest expansion of the government’s role in social policy since Lyndon Johnson’s Great Society programs may be upon us. Yeah, yeah, this is a bit what the critics warned about: the tendency of welfare programs to expand under their own power. But, like the man himself, the issue is still up for debate. For an in-depth perspective on Lyndon Johnson — and the world he came from — American Detours recently spoke with Sherry Justus, natural and cultural resources program manager at the Lyndon B. Johnson National Historical Park. Full interview here.

American Detours: The LBJ National Park is pretty vast. What does it cover?

Sherry Justus: The park is a little less than 700 acres, divided into two districts. One is the LBJ Ranch, approximately 600 acres, then the Johnson City district, around 80 acres. The two districts are separated by 14 miles. LBJ’s grandparents first settled and founded Johnson City [in 1867], so all landmarks and structures were personally important to LBJ.

American Detours: The LBJ Ranch has been called his “circle of life.” Why?

Sherry Justus: Aside from his childhood home in Johnson City, his entire life story can be told within an area of less than a mile. The LBJ Ranch includes his reconstructed birthplace; he was the one who had it reconstructed in 1964. We have his grandparents’ farmhouse, his first school, the Texas White House — the famed ranch house that he knew, first as a boy, and then all through his political career and retirement — then also his graveside.

American Detours: Financially, how would you characterize his childhood?

Sherry Justus: His father was a Texas state legislator. He bought one of the nicest houses in town in 1913 when they moved into Johnson City. It’s a folk Victorian house, it’s preserved to look the way it did when LBJ was a boy. In the parlor you see some of the things they had for entertainment such as the family Victrola, the camera and the stereopticon. You get the feeling in that house, which had a family of seven in it, that maybe they’ve gone away for the day. 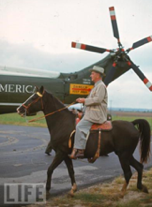 Lyndon Johnson rides by airplane hangar at his ranch, Jan 1964

Sherry Justus: The Texas White House, the rooms are opening sequentially. We plan on having two more rooms, the den and the yellow room, open by June 2010. The den is where Lyndon Johnson met every morning with his ranch foremen and they plotted out the day. The yellow room is the original bedroom of President and Mrs. Johnson. Another thing that’s happening, hopefully by June, we’re getting one of the planes that Lyndon Johnson flew on. We’re getting it from Tucson. It will sit where it did, outside the LBJ ranch airplane hangar (right), so people can see an Air Force One.

American Detours: LBJ spent a quarter of his presidency at the ranch, a presidential record for spending more time working away from Washington, DC than in it. What’s the current status of the ranch? 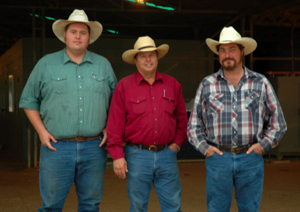 Sherry Justus: We maintain the LBJ ranch as a working cattle ranch. We’ve got much fewer cattle than he had — he had 400 to 500, we’ve got only 100. But we still keep it as a cow-calf operation and in that way we still plant the grasses that the cattle need. We still treat them the same way. We brand them on the horn rather than on the flank, the way it was done in the past. Cattle ranching in the hill country is almost a memory. We’re one of the few places where people can come and see a ranch and talk to people who’ve ranched all their lives, because they’re on our staff. It’s a Texas you’re not going to see in the cities.

American Detours: You’ve been at the LBJ national park almost 15 years. What intrigues you most about LBJ?

Sherry Justus: LBJ was larger than life. He worked two days for everyone else’s one. In my view he was one of the most complex presidents, one of the most interesting. I don’t think anyone has ever figured him out. What he got done as a congressman, a senator, a vice president, and a president — just the sheer magnitude of what he accomplished for the country — is fascinating. The moon. Space. The environment. National parks — more national parks came out of the Johnson administration than during any other administration. Consumer protections. Medicare and Medicaid. There are so many topics that you can dig into here, and that’s why I’ve been fascinated with the park.