You are here: Home » Pearl Harbor, “Day of Infamy,” told in Fredericksburg, Texas

You are here: Home » Pearl Harbor, “Day of Infamy,” told in Fredericksburg, Texas 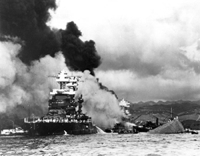 It’s a small town setting for a big time story: Right in the heart of Texas Hill Country, you’ll find America’s only museum dedicated exclusively to telling the story of the Pacific Theater battles during World War Two.

That story began 68 years ago, today, when Japanese forces waged a surprise attack on the United States. In less than two hours, half of America’s military airpower in the Pacific was wiped out, and, most devastating, the battleships Oklahoma and Arizona.

The National Museum of the Pacific War in Fredericksburg, Texas bears witness to that story.

Recently, I had the good pleasure to speak with Museum Director Joe Cavanaugh. Joe shared his take on the museum’s unique role in telling the story of the Pacific Theater — plus he offered details on the museum’s impressive new expansion.

American Detours: The National Museum of the Pacific War is located in Texas. Why is your museum significant nationally?

Joe Cavanaugh: Because it’s a national story — we fought the most significant war of the 20th century on two fronts. This museum is all about the war against the Japanese — and what it took to win that war.

American Detours: It’s an artifacts-based museum. Tell us about some of the top pieces on display.

Joe Cavanaugh: We have the best artifacts collection dealing with the Pacific war. One of the most compelling is an aircraft produced by the Japanese. It was called “Rex” by the Americans, and it’s a float plane … it was a very effective and nimble weapon, the Japanese only produced 97 of them — only three weren’t destroyed. Ours is the only one on exhibit — full size, in all its glory. Beyond that, five midget submarines were supposed to sneak into the harbor and take out the American ships. Of those five submarines, one was captured — and we have that submarine in our Pearl Harbor exhibit.

American Detours: How does your museum explain Japan’s entry into World War Two?

Joe Cavanaugh: We explain, in great detail, the 100 years leading up to Pearl Harbor. The roots can actually be traced back to the 1840s in some ways … to the two opium wars between Great Britain and China. China ended up losing major trade concessions to Great Britain. The Japanese looked at how China, from the Japanese perspective, was not able to withstand the West. Japan began studying the West. By the time of World War Two, almost all of the naval officers famous in Japanese history had college degrees from the United States. They learned how Western nations developed warfare and commerce. That dynamic caused Japan to feel it was more powerful than China as it went into the 20th century. By 1931, the Japanese invaded Manchuria, and, in 1937, China. So, it’s a long string of events that led up to Pearl Harbor. We make that [backstory] comprehensible through our exhibition.

American Detours: President Roosevelt called Pearl Harbor a “day which will live in infamy.” But time marches on. What’s something most people don’t generally know about the Japanese involvement?

Joe Cavanaugh: Many people are unaware they had the largest battleships in the world. They had highly advanced fighter aircraft and submarines — much larger than the United States had at the time. Over the 24 to 36 hours after Pearl Harbor, every single outpost that the United States had in the East was attacked … the Philippines, Guam, Midway, island after island. The Japanese wanted to control those areas for the natural resources they had — rubber, oil, and food supplies — so they would have more capacity to become the preeminent nation in the Eastern world. [The effort] was called the Greater East Asia Co-Prosperity Sphere.

American Detours: The museum was recently expanded an additional 43,000 square feet. Tell us about that.

Joe Cavanaugh: It’s been quite a crunch getting it done on this timeframe … it’s such a large effort. The design is done by Richter Architects from Corpus Cristi, the design of the exhibition is from a firm in Houston and Virginia called the Douglas Group, with a subcontracting group [Marek Hill] doing the graphic design and the fabrication specialists of Exhibit Concepts of Vandalia, Ohio. They were assisted with audiovisual production by two firms, in Indiana and Boston. So, it’s a national effort to get it built, which reflects the national scale of the project.

American Detours: Any tips for touring the museum?

Joe Cavanaugh: The exhibit is so compelling — and so complex — the shortest time to see everything is three hours, minimum. For anyone who wants to drill down and study every detail, it’s going to take considerably longer. So, our new tickets are good for 48 hours. It’s significant for America — and the world — to come to Fredericksburg and understand the story being told.